Salt in the kidney: causes, treatment, methods of breeding

Norovirus intestinal infections in children and adults: symptoms and treatment

Causes vomiting and nausea – which leads to

Why am I feeling sick in the morning on an empty stomach: causes

Home / Intoxication in diseases and infections / Diseases that can cause intoxication of the organism / Vomiting coffee grounds in the adult and child: causes, treatment

Vomiting coffee grounds in the adult and child: causes, treatment

Vomiting coffee grounds occurs when bleeding in the stomach or intestine. At the same vomit has a dark brown or almost black color and a specific grain structure. This condition can occur in people of any age and most often speaks about the threat of pathological processes in the body. Vomiting coffee grounds requires the urgent doctor's advice and is a danger to life.

Reasons why vomiting may occur brown color, a lot. These include the following diseases and some conditions:

Black vomit can also appear for other reasons, for example due to the intake of certain medications. Such medicines include:

Vomiting a dark brown color often indicate disease of the gastrointestinal tract, but in order to ascertain the root cause, you need to consider all possible factors.

If the black vomiting caused by some medications, specific treatment is not required. Usually after discontinuation of medication vomiting black color is without any consequences.

Vomiting brown a person does not arise suddenly, usually this is preceded by certain signs that human health is deteriorating steadfastly.

Bleeding in the stomach and intestine, some amount of blood gets digested in the stool, due to this they acquire a black colour. The consistency of such tarry stool. Extensive and sudden hemorrhage can cause severe anemia and even collapse.

If a person observed a black vomit, then you need not wasting time to call an ambulance, especially if the condition is observed in a small child or a person of advanced age. Algorithm help looks like this: 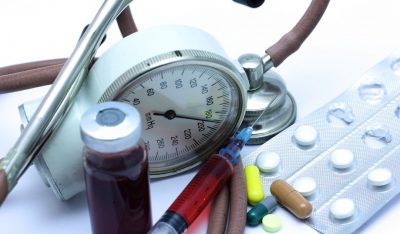 Vomit with black clots collected in a clean glass container and shut tight lid, which indicate the time of collection and basic data of the person. It will help to quickly make a diagnosis and arrange proper treatment.

Diagnosis of the disease

As vomiting coffee grounds can occur in a number of dangerous diseases, it is important to quickly determine the cause of this phenomenon and eliminate it. Arriving by ambulance doctors hospitalityat the patient to the nearest medical facility. The patient is placed in the surgical ward or ICU. Before treatment, carry out diagnostic activities:

Determining the cause of vomiting of a dark brownish color, the doctor prescribes a comprehensive treatment that includes not only medicines, but also physiotherapy.

Vomiting dark shade is not so common in medical practice. Treatment should be started immediately, as inaction may lead to the death of the patient. Treatment Protocol looks like this: 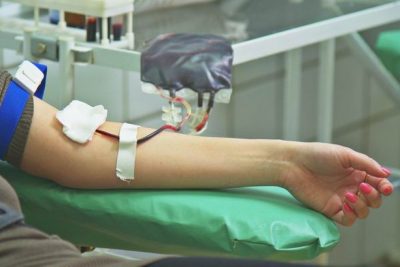 If the patient is observed vomiting a dark color lumps, it should always be under the supervision of doctors. This regularly measures the temperature, pressure and the amount of urine departing.

Special attention is given to young children, pregnant women and the elderly. These groups of patients often with reduced immunity, so any disease in them are heavier than others.

Vomiting the color of coffee grounds may be a symptom of alcohol abuse. People who are affected by this pernicious habit, especially often suffer from disorders of the digestive system and after abundantly received alcohol may experience peptic ulcers of different origin. This situation is doubly dangerous as the person under the influence of alcohol is not always correctly assesses the danger of what is happening.

While binge drinking can develop cirrhosis of the liver, which in turn also leads to massive internal bleeding. Cirrhosis is a serious disease in which there is a destruction of liver cells and the violation of the fundamental functions of the authority. In this case vomiting of a brownish fluid caused by disorders of normal blood circulation. The blood flow is completely disrupted and the blood begins to break through the vessels of the abdominal wall or the esophagus. Often the vessels burst, there is internal bleeding that causes vomiting coffee grounds. 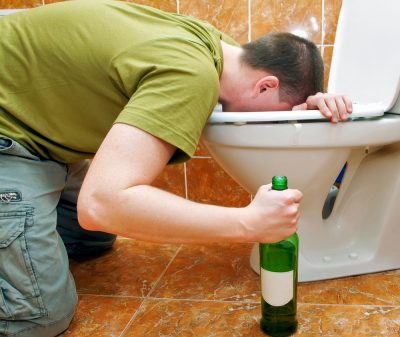 In addition, alcohol abuse can cause disease Mallory-Weiss. It is a longitudinal tear of the esophagus which occurs because of the constant retching that are common in alcoholics. Due to similar pathology in the victim appears weak internal bleeding. The blood slowly passes into the stomach and becomes the cause of not only brown or black vomiting, but the black chair. With the advances in medicine, this pathology causes no danger, but only if the assistance rendered in time. Otherwise, this disease is a persistent anemia, collapse and death.

If vomiting coffee grounds seen in a person who suffers from alcoholism, you need to quickly call a doctor. People under the influence of alcohol dulled the pain, and they lose a sense of reality. That is why many fatal cases are registered in a condition of strong alcoholic intoxication.

Why vomiting the color of coffee grounds happens in young children

Vomiting of brownish or even black, the child can paralyze even the most calm parents. And although there are many diseases that cause this phenomenon, it may be completely harmless. Vomiting in toddlers atypical brown color may be due to such factors as:

In addition, black vomiting can occur after eating blood sausage or Coca-Cola. To determine why, you need to analyze previous events and a child menu. If the state of the baby is normal and do not bother, then it's possible the reason for the vomiting became commonplace overeating certain foods.

If the parents do not see the explanation of brown vomit mass, the baby urgently need to see a doctor, even if his condition seems to be satisfactory.

Reusable vomiting coffee grounds in adults often indicates pathology in the stomach or the intestine. When this condition does not need to self-medicate, as this may harm the patient. The treatment is carried out only in hospitals and only by qualified physicians.