Home / Intoxication in diseases and infections / Poisoning of the body by infection of botulism / Botulism in humans: symptoms, signs, treatment

The use of low-quality food in some cases leads to the ingestion of botulinum toxin, which causes severe damage to internal organs. Botulism is a deadly disease. Therefore, it is necessary to remember its main symptoms and characteristics of the clinical picture.

Botulism is a serious infectious disease that is caused by the vital activity of pathogenic microorganisms. The disease has a pronounced severe symptoms. When not treated may develop complications. In some cases the lesion is so severe that the person dies.

The causative agent of botulism – the bacterium Clostridium (Clostridium botulinum). This anaerobic microorganism, characterized by mobility. Similar in appearance to a stick, whose length is not more than 9 µm. Has the ability to form spores.

In nature the spores of the microorganism found in the soil. The source of infection is feces of animals, fish, shellfish. In them, the bacteria develops and multiplies.

The microorganism itself is not dangerous to humans. Poisoning causes botulism toxin, which is a waste product of the bacteria.

Under what conditions is the activity of bacteria 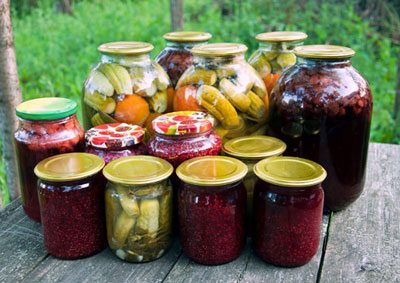 In order to understand the mechanism of the disease, you need to understand how to develop bacteria. Favorable conditions for its existence is the complete absence of oxygen and the ambient temperature in the range from 20 to 35 degrees.

Clostridium has high survivability. She dies in large concentration of salts, spices or acids. In the form of spores, it can live for decades. It does not kill the cold or drying. To get rid of it helps only a long, boiling more than half an hour.

Such properties of Bacillus botulinum, causing food poisoning, making it dangerous for human health. Most often, the infection occurs by eating substandard food in which microorganisms can settle.

The mechanism of the disease

The pathogenesis of the disease is quite simple. Once in the human organism, Clostridium begins to lead an active life. While it produces a large amount of toxin. Hydrochloric acid contained in the stomach, does not cause the organism any effect and does not destroy the toxin.

Toxic substances enter the bloodstream and spread throughout the body. They reach the brain. Therefore, the disease manifests itself in numerous symptoms on the part of all internal organs.

Characteristics of the disease suggests that it appears suddenly. In the beginning it can be easily confused with simple food poisoning. It affects the rate of development of complications. The poison was instantly absorbed through the intestines into the bloodstream and spreads through the body. In this connection it is necessary as soon as possible to diagnose the problem and begin treatment.

What types of diseases exist

Classification of the disease can be performed in several ways. If we talk about the power of destruction, there are the following forms of the disease: 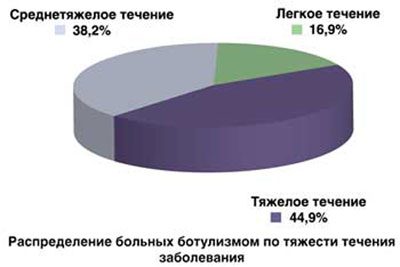 Especially dangerous is a severe form of defeat. At untimely or incorrect treatment, it could lead to death.

Clinical disease will depend on its shape. Therefore before you develop a programtreatment experts identify the source of infection.

Methods of infection and how to prevent the multiplication of clostridia

Most often the etiology of the disease lies in the use of poor quality or stale food. Because Clostridium only live in the absence of oxygen, the infection occurs from certain foods, e.g., canned food, prepared at home. 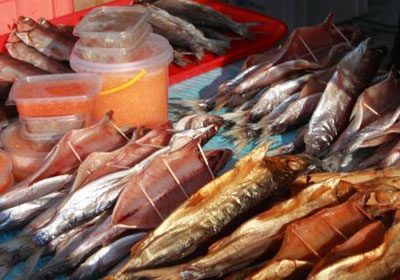 Causes of illness can lurk in the consumption of seafood. Clostridia feel good in the body of fish and shellfish. To the list of dangerous products include the following:

Food poisoning can cause any products that have not undergone sufficient heat treatment. Microorganisms do not affect the color or smell of food.

As the life of the bacteria produce large amounts of gas, so to identify infected botulism canned food can be swollen the lid on the pot.

If you love homemade preserves, then their preparation must follow some rules: 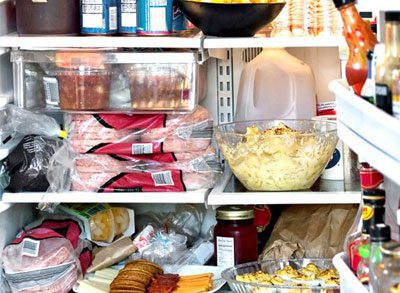 Compliance with such recommendations will allow you to protect yourself and loved ones from infection. If any canned food has questionable quality, certainly their discard.

The first warning signs and symptoms

As soon as the incubation period, begin to show the first signs of botulism in humans. Onset of the disease in adults can be both smooth and sharp. It is important not to try to self-medicate, and immediately contact a specialist, while valuable time is not yet lost. Identify the following early symptoms: 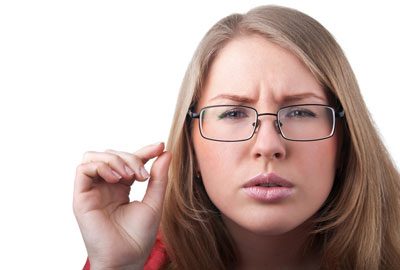 While intoxication is not accompanied by fever or loss of consciousness, as it is with ordinary food poisoning. There is no loss of sensitivity.

The manifestation of the disease may be different – depending on what system of the body is attacked. There are several possible scenarios: 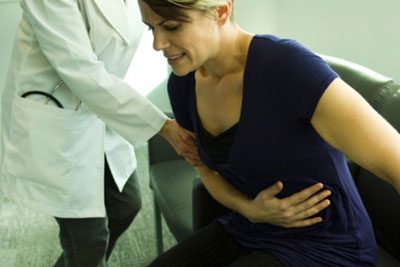 In order for the treatment is successful, it is necessary as soon as possible to diagnose the problem. Therefore, if you notice such symptoms should immediately seek help from a doctor. Self-medication in this case especially dangerous to life.

Peculiarities of disease in children

For violation of sanitary norms and rules personal hygiene the bacteria can get into the body of the baby. In rare cases, the cause of the infection becomes milk formula low quality. The disease affects infants up to six months. The case definition of botulism in newborns is performed according to the following criteria: 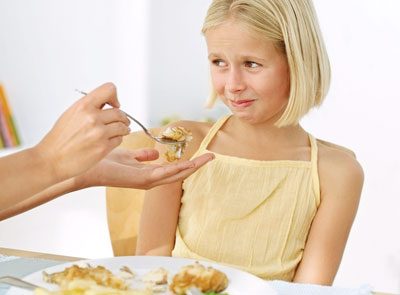 These symptoms are reason enough to immediately call an ambulance. The only way to avoid serious health consequences.

In a later age the disease can manifest itself in other symptoms. These include:

If the child has got quite a lot of toxin, it is showing signs of dyspepsia. At the lowest dose of toxic substances, the symptoms may be limited to nausea, pain in the abdomen, dryness of the mouth.

If you notice signs of illness should immediately go to the doctor. Only a specialist can accurately diagnose and develop competent therapy. Diagnosis of botulism includes the following activities: 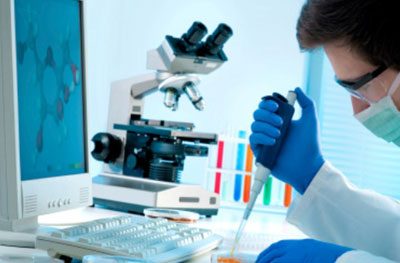 Botulism can easily be confused with poliomyelitis, encephalitis, poisoning with atropine. So be sure to conduct a wide range of laboratory tests.

Only the correct and timely diagnosis will enable you to put the correct diagnosis. Therapy program will be developed based on the degree of severity of the disease and the characteristics of the patient.

Therapy with the development of botulism

As soon as you detect the first signs of botulism, you should immediately call an ambulance. If serious lesions will need hospitalization. But in some cases the waiting time of arrival of a brigade of doctors may be delayed. The loss of precious hours is costly to the patient. It is recommended to take the following first aid measures: 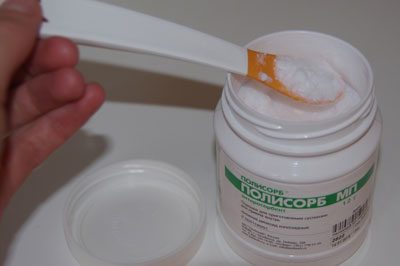 Never neglect the first aid measures. Such actions are very effective. They will help to contain the disease and avoid serious consequences for human health.

The vast majority of cases require hospitalization of the patient. Only the timely treatment of botulism in a hospital guarantees the recovery. Therapy includes the following activities: 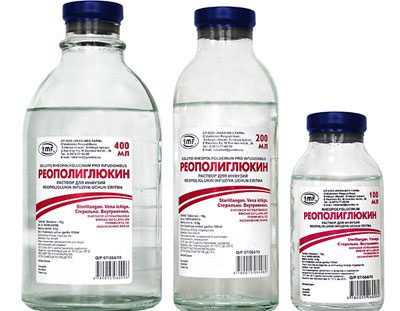 In order that the treatment is successful, it is necessary to strictly follow all clinical recommendations of a specialist. After symptoms are cured and the disease will go on recession, the patient is recommended to undergo physiotherapy. As a rule, the duration of treatment is not more than four weeks. Fatigue after botulism can persist for up to six months.

One of the essential components in the treatment of botulism is getting proper nutrition. Especially important is the diet in severe injury. If impaired swallowing function, the victim fed exclusively liquid food, which is served directly into the stomach using a probe.

Once the symptoms began to recede, the patient is transferred to a sparing diet. It will have to adhere to during treatment and for three weeks after. Experts recommend to select a menu from the following dishes: 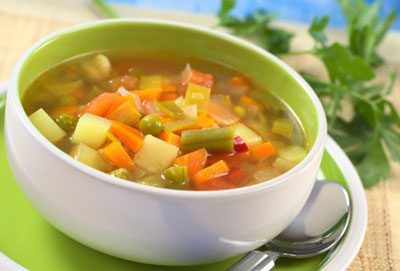 This food will help to provide the body with necessary nutrients and don't overload it. Any deviation from such a diet can lead to negative consequences.

People's methods of recovery after illness

Traditional medicine have developed several their funds for the treatment of poisoning with botulinum toxin. But remember that they can be used only after the consultation with the doctor and completing the full course of therapy traditional medicine. Such funds are allowed to apply only during the period of rehabilitation. They will help to improve health and to eliminate the effects of intoxication.

Is strictly prohibited the use of traditional medicine as the primary treatment of botulism. This will lead to negative consequences including death. Don't try to heal yourself, at the first symptoms immediately contact your doctor.

Among the most effective means of recovery after poisoning with botulinum toxin, identify the following: 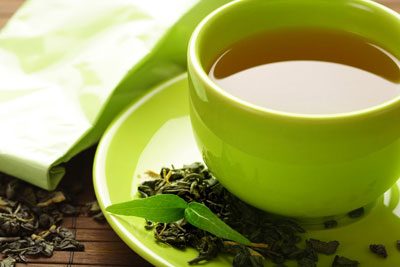 The application of such remedies is contraindicated in the presence of allergic reactions to individual components. Therefore, beforetreatment consult your doctor.

What complications can arise

If you do attempt self-treatment of botulism and miss precious time, greater the likelihood of developing serious complications. These include: 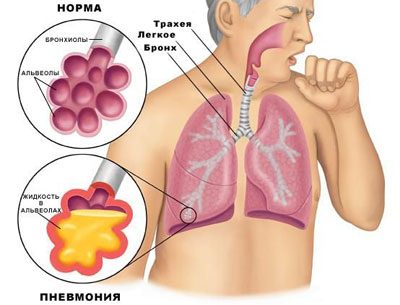 The effects of botulism require a separate treatment, which is assigned to the specialistsof M. During the six weeks after the primary treatment may be some symptoms, such as headaches or twang voice.

If the human body promptly received protivobotulinicheskoy serum, the prognosis is favorable. Modern methods of treatment reduced the mortality rate to 10%. The recovery period lasts about three months, followed by a full vyzdorovlenieE.

If time does not help, then the likelihood of death is high enough. Death is most often associated with paralysis of the muscles of the respiratory system. In the absence of ventilation killed about 60% of the victims. 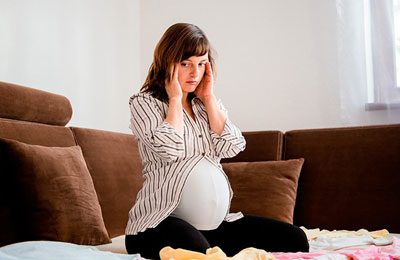 Without the use of potent drugs botulism can not get rid of. This adversely affects the status of the fetus. Most often occurs the interruption of gestationI. If the child remains alive, he will be born with developmental disorders, and numerous pathologies.

In this regard, while waiting for the baby a woman needs to carefully monitor the health and carefully used products. From smoked products and canned food is better to refuse and to comply with all prevention.

Lose of body botulinum toxin is fraught with serious consequences for health. So it's easier to prevent infection. Prevention of botulism should include the following activities: 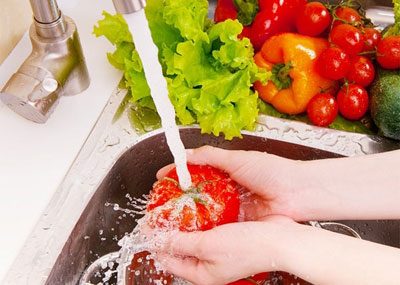 Prevention of the disease must be respected and at the state level. They include control over the production of canned products, sausages, meat and fish semi-finished products. Special attention should be paid to shelf life and storage conditions of the products.

Botulism is a dangerous disease that requires careful treatment. Only the application of all therapeutic measures can guarantee a recovery. Otherwise, the probability of a lethal outcome. Therefore, in no case do not self-medicate. Upon detection yourself or your loved ones symptoms immediately call an ambulance. Always remember prevention.