Among the butterflies that are related to insects representing the order Lepidoptera, of poisonous little. The toxic substances in the most part supplied their larvae-the caterpillars. Moreover, such dangerous individuals are more common in tropical and subtropical latitudes.

A description of the most known poisonous butterflies

Beautiful fluttering creation use of toxic compounds, defense against natural enemies. With its bright color like caterpillars and butterflies warn of the danger. Poisonous butterflies are found in different regions of the world.

The family of Orani refers to the tropical species. They are distinguished by bright colored, with metallic luster patterns, so they are among the most beautiful insects in the world. For the unusual color of the wings they got the name "butterfly sunset". Among Orani meet day and night specimens.

Female lays eggs on plants from the family Euphorbiaceae. Hatched caterpillars (larvae) eat the leaves. And since the juice Euphorbiaceae toxic, they first get used to it, and then become immune, accumulating the toxins. Caterpillar has bright coloring and sharp bristles, warning of the dangers. The color of adults is also a warning.

To the group of poisonous butterflies include the monarch. This is monarch butterflies, butterflies are the kings with a wide wingspan of the red-brown tones with dark trim. Their main habitat is North America. Bright stripes of different colors indicate the presence of poison in the body of the insect, and therefore bird flies by their side.

Eggs are laid on the leaves of milkweed plants rich in poisonous glycosides. Eating the leaves the caterpillars in abundance accumulate the poison in his body. They are also painted in bright yellow color with black stripes.

An interesting fact is the migration of Danailov. In late summer they gather in large groups and make flights on distance up to 3000 km away in Central America. They don't change the route, as if it's in their genetic program. Reaching the wintering grounds, the butterflies hang in clusters from the trunks of trees and remain motionless (asleep) for 4 months.

Interesting insects include helikonida, representatives of Central and South America, which is also called "strastotsveta butterflies". They have:

Helikonida in the evening form clusters, sleeping groups. In the morning, with the flight of one individual, the whole flock takes off. Butterflies are characterized by high life expectancy.

Poisonous to flying insects and are and Comedy living in the forests of America. Their wings can be transparent or colored in orange-yellow with black trim. Since caterpillars eat poisonous plants, and butterflies later become inedible.

For example, icomia patella widespread in South America as it migrates from one place to another. Externally it is unremarkable. Icomia lays eggs on solanaceous plants. Feeding them caterpillars and later butterflies become poisonous. 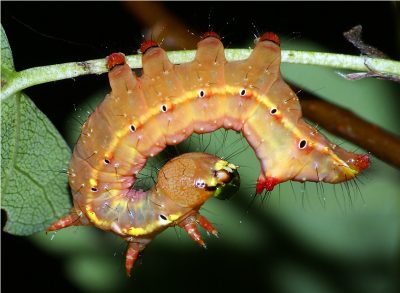 The list will continue night members of the family Corydalis, which are found in different parts of the world. Such names they received for hairy torso. But the wings are small and quite inconspicuous. Adult bland, that is not true of its larvae. The caterpillar is different:

Pupae winter in cocoons. When the warm winter or a long summer possible mass outbreaks of caterpillars, which become a real disaster for deciduous trees.

The most famous among the Corydalis is the harpy a large, living in Europe. Butterfly shaggy, with a large wingspan and intimidating appearance, who leads nocturnal.

Interesting description of the caterpillar, like a little monster. Starting to worry, she lifts a front part of the body, involves the head and of the rear fork appears writhing tangle of red threads. Caterpillar defends itself by releasing into the air the secret with a pungent odor.

The most dangerous caterpillars

Poisonous butterflies to humans include the following types.

Lonomia (Lonomia Obliqua), which is dangerous in the stage of caterpillar. It dwells in humid forests of South America. The caterpillar is dark, covered with green spines and fairly large – up to 7 cm Eats at night and sleeps during the day, and was dubbed "lazy clown".

Has a toxin that inhibits blood clotting. The person who touched the caterpillar:

If time does not take first aid measures, the consequences of such contact can be sad.

Lonomia invisible among the foliage, and are often the victims tourists. Because the caterpillars appear on farms and in orchards, it seemsthe danger for local residents. 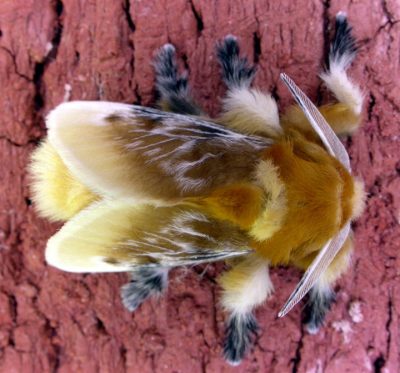 Hairy caterpillar (Megalopyge opercularis) is the larval stage of a butterfly: fluffy and cute creature, which is called the moth-yoke. Adult medium-sized, about the size of a larval stage, with variegated wings and poisonous spikes on the sides. She lives in the Northern United States.

But the most toxic caterpillar, which has a small size up to 3 cm and a fluffy body brown with 14 the pseudopod. Lives on the leaves or the bark of trees.

Shaggy hair hidden thorns-thorns that break easily, releasing the poison. At a meeting with moth-yoke a person is experiencing symptoms of acute poisoning. With a slight hit of poison the symptoms disappear in a day. With a large number of toxic substances painful symptoms will pass after 5 days.

First aid after contact with poison butterflies into the body

Usually affects vulnerable areas of the body: face, hands, neck. Harder to bear poisoning when ingested hairs of the larvae into the eyes, the respiratory tract or the digestive tract. Most poisonings are random and happen if to touch the insect.

The human exposure to toxic substances has a combined character: the violation of the integrity of the skin and the action of toxic substances. Depending on the composition of the venom of possible toxicity, Allergy or local defeat.

The most difficult to tolerate such poisoning of children. But we should not panic, move fast or applying heat to the wound. All this will enhance the spread of venom through the bloodstream.

All the symptoms similar to severe poisoning, but they may differ as poisons butterflies and their larvae have a different composition. There is redness and pain at the site of the bite, possible rash on body, high fever, nausea and vomiting, muscle aches and spasms in them. 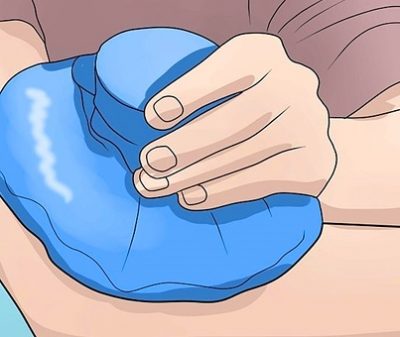 Before the arrival of the doctor it is important to provide first aid:

Further action at toxic damage will be performed by medical providers. If you are in another country, then there are vaccinations and serums against known in the area for poisonous animals.

"Meeting" a man with the poisonous insects occurs suddenly, therefore, to predict consequences or to prevent the entry of poison in the organism is impossible. Try to behave with restraint and to take all necessary measures to preserve his health and life.