Solanine in potatoes appears when the root has contact with the sun's rays – not necessarily straight. In the spring, when nature awakens, the supplies of potatoes lying in cold enough and dark place, begin to germinate. Coupled with sun exposure the skin of the tuber turns green and shoots just throw on color. From grandparents all know that green potatoes are not. The dangers of solanine overgrown with legends: it is believed that if to clean off the green layer, can still be subjected to poisoning, as an invisible poison seeped into the roots through. I am afraid of solanine and how can they be poisoned?

Poisoning by solanine in potatoes

Since Peter the great introduced into the Russian culture, the cultivation of potatoes, do not cease debate about its benefits and harms. History remembers a lot of evidence of deaths – people were poisoned fruits of this plant, not realizing that the food is only good tubers.

Potato is a very useful vegetable that contains a large number of trace elements, carbohydrates, proteins, and starch. In its composition there are also essential for good digestion fiber, potassium, carotene, vitamins and high content of folic and organic acids.

The solanine content of the potato and its content in tubers depends on the quality of transportation and maintenance.

Solanine is a plant alkaloid, its content in the root are distributed on the skin and cambiava the layer beneath it. Towards the middle of the potatoes the concentration of solanine even with the green appearance of the root is insignificant. Small content can have a therapeutic effect on the body. Besides eating this vegetable ready-made along with the skin will lead to better absorption of its components, as the peel will help digestion and maximum nutrient content, it is right next to her.

But you should not eat green skin food – even a very strong stomach to cope with a high concentration of alkaloid and inevitable poisoning. Green peel you can peel away, after that, feel free to use vegetable in food.

The maximum amount of the toxin solanine contained in the berries and leaves of potatoes, which are poisonous and unfit for food. To obtain a lethal dose, enough to eat a few of these berries. Potatoes, if it grew underground, like the root, not on the surface of the earth, which has in its composition toxic doses of deadly substances. 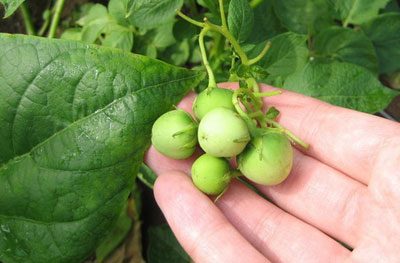 However, in the cultivation of this crop possible negligence and negligence. What if green potatoes during growth and maturation were above the ground and come up under the sunlight, then was used in production and released from the factory chips or another product? Is it possible to poison them?

Solanine is poorly absorbed in the gastrointestinal tract to cause any harm they need such concentration, at which the body can not cope. In view of the dangerous product will contain a green pigment. When cleaning the layer of potatoes with a green pigment that indicates the presence of solanine, the toxin dose is reduced significantly. But to eat such potatoes, peeled and even after the thermal treatment, unsafe – not excluded cases of minor disorders of the gastrointestinal tract in violation of the chair and other unpleasant symptoms.

Potato poisoning in a child may, if the body fall from 2 to 5 mg of a hazardous substance per kilogram of body weight. At this dose begins to experience toxic effects, and its excess is critical to life. So don't let the green potatoes to their children.

Poisoning by solanine in other products

Solanine poisoning is possible with the use of this poison with plants, in which it contains – potatoes, eggplant, unripe tomatoes. The amount of food eaten by mistake or ignorance can cause significant injury in the case, when it exceeded a critical concentration of the poison in the body, which is approximately 300 mg. 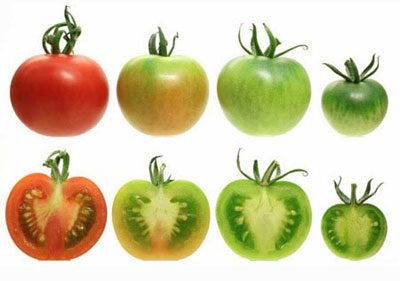 A high concentration of solanine in tomatoes is also in the immature appearance of this vegetable. Cask green tomatoes, salads with their add and other dishes can often be found in Russian cuisine. The properties of this delicacy are such that solanine significantly reduced if soak the product in warm water. But the process of cooking all sorts of preservation of green tomatoes accompanied by just using pickling water-based. Waino know that products containing solanine – including tomatoes – can cause an allergic reaction in people who are prone to food allergies.

The product is not recommended for those who have a weak and sensitive stomach. Children also should be wary to refer to products with the content of solanine, as the child's body may be unsuited to the digestion of this potent alkaloid.

Solanine in tomatoes, can cause severe poisoning in which the somnolence, lethargy and disturbed respiratory rhythm, as this alkaloid acts on the Central nervous system. The effect on the stomach due to nausea, vomiting, diarrhea. General intoxication can lead to headaches.

You should refrain from eating unripe tomato pregnant and lactatingwomen to avoid risk for the development of the child.

Poisoning tomatoes dangerous because you can miss the critical point of receiving the toxin, because the tomatoes, the concentration of solanine is much less than in potatoes or eggplant, and for this reason they do not taste bitter. Taking in food is quite edible product, people may not be aware that it is dangerous to his health. Besides, there is a possibility of intolerance to this alkaloid. 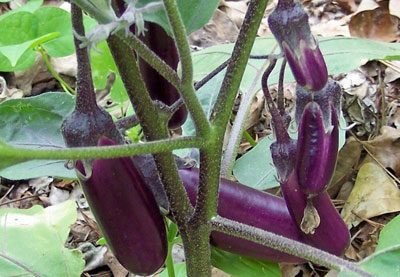 If the presence of solanine in potatoes and tomatoes due to their immaturity, eggplant, things are the opposite. Overripe and long hanging on the branch of a vegetable accumulates in itself a dangerous toxin. This vegetable is a carrier of solanine, which is assigned the category "M" that means its special properties and a greater toxic effect. Its maximum concentration in vegetables occurs when you have eggplant growing in the wild. Due to lack of regular watering and hot climate, where it grows wild culture, most often occurs poisoning eggplant.

In addition, the eggplant is not recommended to be eaten when the fruit has long been on the Bush and lost the original luster cover. Dull eggplants attests to their age and there is a high probability that it contains a large dose of solanine.

To determine the suitability of eggplant in food, can be done according to the following criteria: 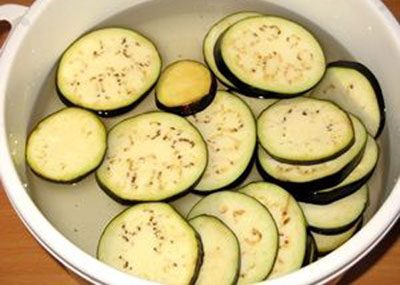 Solanine in eggplant, you can reduce if you RUB the slices with salt or pour salt solution for a few minutes. This popular method helps to get rid of bitterness and, hence, causes its caller – solanine.

Initially, eggplant became popular as medicine, and only later learn to cultivate it for human consumption. This vegetable contains essential for a healthy diet elements, it has an antibacterial effect, leads to normal cholesterol, is able to remove toxins from the body.

Therefore, besides regular use in food, it can still be used for cancer prevention, applied on open wounds to disinfect and deal with other health problems.

The symptoms of solanine poisoning and first aid

Poisoning by any plant poisons has similar symptoms. Symptoms begin to appear after an average of 4 hours and are characterized by sharp pains and cramps in the stomach and intestines. Then there are other signs of disorders of the gastrointestinal tract – vomiting, upset his chair. Effect of solanine on the nervous system leaves the signs of intoxication in the form of headaches, dilated pupils, confusion, seizures. Cardio-osobisty system, there is tachycardia, arrhythmia, and shortness of breath.

Solanine has a sharp bitter taste, so the mouth can not stay long bitterness. 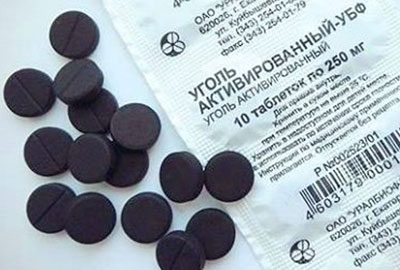 After detection of the first symptoms should immediately call a doctor, as the nature of the course of poisoning can be unpredictable and it is unknown how the body reacts to this poison.

Before the arrival of ambulance crews should drink more fluids and take chelators – activated carbon etc. it is Important to remember that professional help at a poisoning may have only a doctor in a hospital, where there is this all necessary equipment required for treatment. Therefore, to refuse admission if it is established that the poisoning by solanine, it is impossible.

In answer to the question of harmful green tomatoes, old potato or eggplant, there is no definite answer. From any product it is possible to both benefit and harm. Be aware of hazardous substances that surround us in everyday life, to be prepared to competently respond to the threat. Special harm from foods containing solanine no, if they do not seem heavily affected by late blight and if you are confident in the fortress of his stomach.