Treatment of food poisoning in the home

Food poisoning in an adult: symptoms and treatment

What is protein poisoning: symptoms, treatment

When all the mushrooms in the woods have been collected, fans of "quiet hunt" don't relax – delicious greenfinches, blewits or green, can be assembled before the first frost. These fruiting bodies of the mycelium unusual olive green can be pickled, salt in wooden barrels, to add in a fragrant soup and fries. But accidentally caught in the basket poisonous lookalike or neglect of long heat treatment to cause poisoning greenfinches. Even mistaken the mushroom with a lot of experience, so you need to know how symptoms of intoxication, and to be able to render first aid to the victim.

Keen eyesight will be useful in the search for tasty mushroom. Among the fallen autumn leaves and pine needles in hard to find brown hat greenfinches. Short leg is hiding deep in the earth, so when you search you should be armed with a long stick and carefully stir up the pine mound. Experienced mushroom hunters are advised not to worry if under a pile of leaves there is only one large green ryadovka. Nearby will be a strong scattering of small mushrooms.

Zelenushka able to only grow near pine trees, with roots which had a symbiotic relationship. So search for these forest products should be in those woods and groves, where there are many pine or fir trees.

Despite the shorter leg, hat greenfinches can reach 15 cm in diameter. Its color varies from intense green to pale olive. When you break the fruit body visible white flesh, long to change color. To distinguish the real green blewits from poisonous fellow will help odor:

Hat is covered with a thin, easy schemaupdate skin. At the onset of cold weather it becomes wet, slippery to the touch. Experts say that the skin is blamed for several deadly poisonings greenfinches.

What mushrooms can be mistaken for greenfinches

It would seem that the mushroom of such unusual color is unmistakable. Despite the presence of the characteristic ruffles around the legs pale toadstool, beginners sometimes confuse it with zelenushka. Young specimens of poisonous toadstools sometimes have a greenish colour of cap and stem. The following lists what else you can mix up a tasty mushroom. 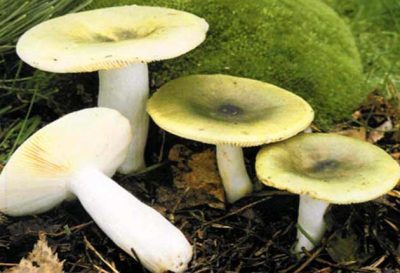 Zelenushka sometimes confused with certain types putannikov. Edible mushrooms in form and coloration similar to green ryadovka, but never grow in coniferous forests. Feature of cortinarius is the presence of large amounts of mucus from the lower part of the cap.

Zelenushka distinguished from its poisonous counterparts, the lack of wormholes. Some pickers think it's a sign of the toxicity of the fruit body. It is a widespread misconception, because in the forest there are often toadstools, completely eaten by worms.

Why zelenskoy may be poisonous

All mushrooms are considered heavy food difficult to digest. Documented cases of fatal poisoning by greenfinches happened because of their overeating. People suffering from diseases of the gastrointestinal tract, it is not recommended to drink green blewits at all. In the legs of fruiting bodies is a large number of connective fibers, which for a long time to digest. People with digestive disorders greenfinches provoke heartburn, flatulence, upset his chair.

Do not give meals with green Radovani children up to 12 years. Their digestive system is not able to fully digest protein compounds of mushrooms. Specific taste and coloring can cause in babies severe allergic reactions: anaphylactic shock and angioedema. 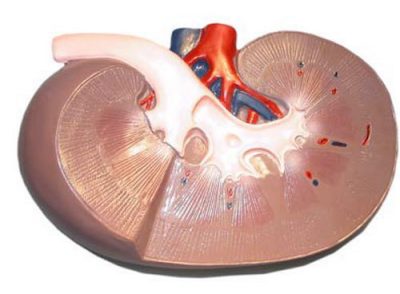 Inexperienced mushroom pickers collect green blewits in coniferous plantations along highways or near industrial enterprises. A delicate hat of mushroom absorbs harmful substances and toxins from the environment. After consumption of such instances comes a heavy mushroom poisoning with greenfinches, causing disruption of the urinary system:

To provoke poisoning may already at the stage of collecting mushrooms. The feature of the structure of greenfinches is a short leg, located deep under the ground. Inexperienced mushroom pickers, cut at the root of the fruit body, turn it and begin to identify. The particles of sand and earth crumble, stick to the lower part of the cap. Thoroughly wash infurther such contamination is extremely difficult.

After cutting the fruit body should lift the mushroom on the ground and, without turning, shake adhering debris. Experts recommend to completely remove the contaminated part of the leg. Zelenushka only wiping with a damp cloth, the fungus should be put in the basket. 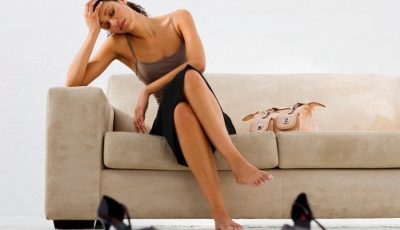 In some European countries zelenushka included in the register of poisonous mushrooms, not allowed to eat after several fatal cases of poisoning. Discovered in the fruit bodies of toxins capable of destroying muscle tissue. The continuous use of these mushrooms for cooking a person has muscle weakness. This is reflected in the fine tremor of the upper and lower extremities.

Found in green Radovich toxins negatively affect the functioning of the cardiovascular system. Prolonged use of fungi often experience the following complications:

If the urine has acquired a dark brown color, so the toxin has already occurred. You should immediately exclude greenfinches from the diet and consult the doctor for medical treatment.

Symptoms of poisoning with greenfinches

The clinical picture of poisoning by these fungi in the initial stage is similar to food intoxication. The speed and the severity of symptoms depends on the state of health of the person and the amount eaten by greenfinches. After 3-4 hours after eating you may experience the following symptoms of poisoning greenfinches: 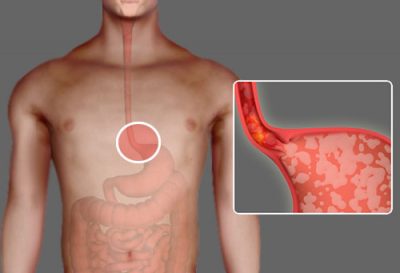 In case of poisoning by canned greenfinches, we cannot exclude ingestion of the causative agent of botulism. Symptoms of poisoning appear a few hours after a meal. If you do not deliver the victim to hospital immediately, the signs of intoxication develop into severe complications with possible fatal outcome.

You should pay attention to frequent dizziness – in the absence of treatment, they will be replaced by a deep fainting. Zelenushka rich in anticoagulants: in patients suffering from networkelement blood, the fungus can cause dangerous bleeding.

After calling the doctor to the victim should give first aid:

Nutritionists and doctors advise to limit the use of greenfinches due to the proven toxicity and ability to absorb harmful substances from the environment. Do not buy mushrooms at spontaneous markets along the major roads. To avoid toxicity, must be green blewits long thermal processing and to glaze only in boiled form.