Finlepsin overdose: a lethal dose and the antidote

Suprastin: overdose in adults and children

Celandine is a modest unpretentious plant, the main component of many recipes of traditional medicine. It is used for the manufacture of ointments, tinctures, decoctions, which have bactericidal and wound healing actions. But long-term treatment, excess dosages, failure to observe precautions when handling poisonous substances provoke poisoning celandine. Harmless at first glance, the grass can cause pulmonary edema and cardiac arrest.

The characteristic features of the celandine

In the Botanical literature describes several types of celandine, but the most famous and recognizable – the celandine, or Chelidonium majus. Plant with Golden flowers and dark green petiolate leaves can grow up to a meter tall. Originally celandine grows in Europe and the Mediterranean countries, the regions with a temperate climate. And in the era of the conquistadors, the grass was brought to America for treatment of skin diseases.

Some fruits of plants contain succulent structure (Elisama), which the ants feed their larvae. The seeds of the plant resemble lisomu that causes insects to bring them to the nests. In a moist, warm environment to germinate seeds successfully.

The fault is a direct stem of the celandine is allocated a thick juice, which outdoors is painted in orange color. The Latinized name for the plant means "swallow". In ancient times it was believed that birds treat their blind Chicks juice of the grass, burying him in the eye.

Poisoning various parts of the plant may occur both in internal and for external use. But when the prescribed dosage plant brings tangible benefits to the body: 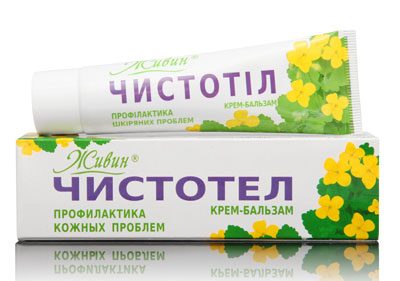 Diuretic properties of poisonous herbs are not used in folk and official medicine due to high toxicity of the herb. For this reason, it ceased to be used in the treatment of ocular pathologies after frequent cases of ulceration of the mucous membrane.

On the basis of celandine were synthesized drug for the prevention and treatment of malignant tumors. Receiving pharmacological agents does not replace the main treatment and chemotherapy.

The seeds of plants are made of fatty oil, which has anti-corrosion effect. Bright orange juice from the stem is used for making dyes, including biological objects. Antimicrobial properties of the plant can be used for disinfection and regeneration of burnt skin.

Poisonous properties of the plant

The composition of the grasses varied. The highest concentration of toxic compounds accumulated in the stem and roots. To dangerous for human life toxins are alkaloids, which are listed below: 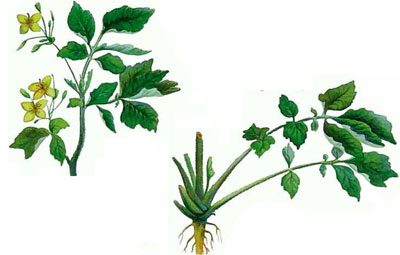 Human poisoning can occur under the influence of any component of the chemical composition of celandine. And when all of the poisonous properties of intoxication will lead to serious complications and even death.

In the pastures of farmland animals avoid the areas where there is a growing celandine. When hay farmers are trying to prevent falling into food, even separate instances of plants that retain toxic properties in the dried form.

Treatment with greater celandine is contraindicated in pregnancy, during breast-feeding. Categoricallyit is forbidden to use the funds on the basis of the juice of the plant in the treatment of children and adolescents with increased permeability of blood vessels. Poisonous grass can trigger a recurrence of chronic diseases of the liver and urinary system. People with systemic diseases should consult a endocrinologist and a dermatologist before using infusions or tinctures of celandine. 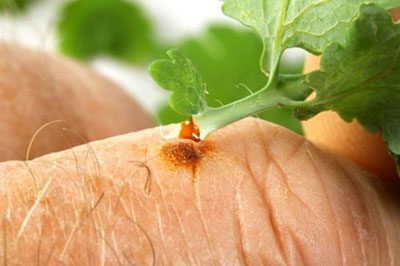 In intensive care units often get patients with the diagnosis sharp poisoning with poisonous alkaloids of celandine. In the vast majority of cases victims are treated independently according to the recipes of dubious pamphlets or on the advice of a neighbor. Intoxication may develop due to incorrect harvesting of plants and their further processing.

It is impossible to collect herbs, growing along the highways, major roads, in the courtyards of apartment buildings, around industrial enterprises. Celandine is able to actively absorb toxins from the surrounding atmosphere.

The main mistake that people make when treating a poisonous grass, is a gradual or rapid increase in dose with the goal of a speedy recovery. Celandine alkaloids can accumulate in cells and tissues, so every extra drop of the adopted tools will cause fatal poisoning. A person with abnormalities of the urinary system restricts the use of the plant because of violation of blood filtration and (or) excretion of urine.

Some patients intensive care wards came to therapy in a complex, wanting to get rid of all diseases at once. They cauterized warts juice of celandine and simultaneously drank a tincture of celandine to treat gallbladder. Even a healthy liver will quickly fail, not transferring excessive load. Capacity not able to neutralize and recycle this amount of toxic compounds. Is the destruction of liver cells, necrosis of the biological filter. A continuation of the "therapy" ends with an extensive abscess.

Poisoning can occur when improper storage of highly concentrated aqueous or alcoholic tinctures. Young children are extremely curious – they are able to attract the mysterious bottles and vials. There are many cases of lethal poisoning of citizens suffering from alcoholism. Relatives well-hid alcohol from them, not taking into account the medicinal tincture of celandine on alcohol. Alcoholics enough to take a small number of such funds to the arriving doctors stated the death of a person. 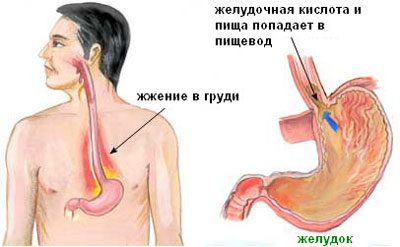 The severity of the clinical picture of poisoning is in direct proportion to the dose of toxic substances, ways of penetration into the blood stream, the body resistance of the victim to the action of endotoxins. More frequently diagnosed chronic poisoning the lovers of self, accept the solutions of celandine. For this form of intoxication is characterized by the following symptoms:

The danger of this intoxication is the possibility of more overdoses. People begin to take celandine in large amounts to ease their condition.

In chronic poisoning, the victims are not able to recognize the problem, to make the right conclusion about the cause of the illness. Intoxication revealed in the process of significant damage to the liver, kidneys, heart, blood vessels.

The acute form of poisoning develops in case of accidental or deliberate oral ingestion of large doses of celandine alkaloids. The victim develops such signs of intoxication:

As the absorption of the alkaloids of celandine in the blood in humans, there are convulsions, edema of the lungs and brain. In the absence of medical intervention the death of the victim occurs within a few minutes.

First aid and treatment of intoxication with celandine 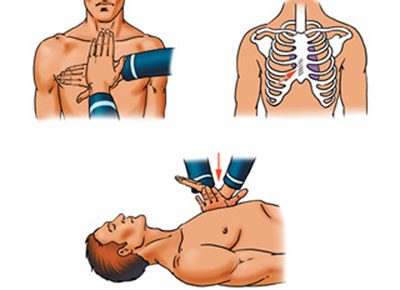 The surrounding of the affected people are unable to evaluate his condition because of ignorance of the dose. Therefore, you should immediately call a doctor, who will conduct detoxication therapy. While the doctor is in the way, you need to give the man first aid. If he is unconscious, turn him on his side and cover. During cardiac arrest resuscitation manipulations are carried out:

At hit of juice of celandine on the skin or mucous membranes must be washed toxic substance streamof water and treated with disinfectant solutions. In the case when a poisonous substance infiltrated in the gastro-intestinal tract, need to induce vomiting:

In poisoning by vegetable alkaloids can be given to any person a laxative. Not adsorbed by the walls of the digestive system the poison is quickly eliminated from the body.

A comprehensive antidote to intoxication celandine does not exist. Dr. hospitalitynet patient for treatment with drugs that neutralize the action of the alkaloids. Further treatment is based on eliminating the symptoms of poisoning of saline with glucose, diuretic medications.