Home / The types of poisonings: food, chemical, mushrooms etc. / Alcohol and drug poisoning: symptoms and signs / The effects of an overdose with methadone: intoxication, withdrawal

Methadone, synthesized for the treatment of heroin addiction, he becomes the cause of addiction. The drug is banned for use in our country, but there are so-called "street" drug. After you apply dubious mixtures there is often an overdose of methadone, almost always ending with someone's death or profound disability. To help the addict can only urgent medical intervention.

The purpose of methadone

Methadone is a synthetic opioid drugs. Drug even included in the List who as of drugs used in the treatment of heroin addiction. But with the caveat that the use of methadone is possible only in the framework of special programs to support drug users to avoid overdose.

The drug has a strong analgesic effect and is intended for the relief of pain when the narcotic withdrawal. The opening of methadone belongs to the German scientists who synthesized it in 1937. After a few years, in the midst of the Second world war, was deployed wide production of opioid.

The action of methadone

Opioid methadone is available in the following dosage forms:

The drug is rapidly absorbed mucosa of the gastrointestinal tract, and the maximum therapeutic effect occurs within 3-3,5 hours after consumption. For parenteral administration, about 10-15 minutes methadone begins to flow into the bloodstream, and peak concentrations are recorded in 1-1.5 hours.

The possibility of overdose is based on cumulative (cumulative) effect of methadone. After re-introduction, it starts to Deposit in the tissues of internal organs and blood vessels. The additional use of even a small amount leads to fatal intoxication. 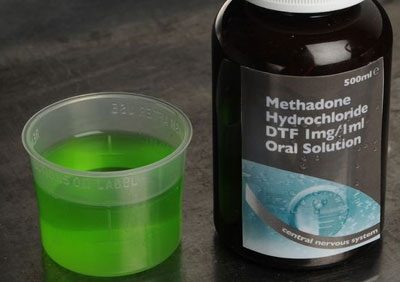 The half-life of the drug from the human body about 12 hours. The main burden falls on the urinary system: kidneys and ureters. Poisoning by methadone often is due to a few razblokirovanie therapeutic effects of opioid:

Novice drug to enhance euphoria do not wait until the methadone is completely removed from the body, and take another portion, which becomes the cause of fatal overdoses.

During 24-72 hours after taking the drug the person may experience visual and auditory hallucinations, disorientation in space. This also often becomes the cause of death, so they are not able to soberly assess the danger of the situation and to use the opportunity for salvation. With the increasing dependence of disturbed activity of the higher nervous system – the addict may threaten the health and life of others.

Effects of taking methadone for the human body

The euphoric effect of the drug takes its toll for the addict — the addiction develops after the administration of several doses of the opioid. Withdrawal from methadone is most likely to occur at the initial stage of acceptance, when not developed a habit to toxic substance. Rejection of it causes painful symptoms, more painful than the elimination of heroin addiction.

Narcotic effects of methadone weaker than the euphoria of heroin, so the person is trying to intensify the effect, sticking itself increased amounts of opioid. Occurs an overdose, leading to respiratory failure and cardiac arrest.

Regular introduction of methadone injection deals a terrible blow to all systems of life: 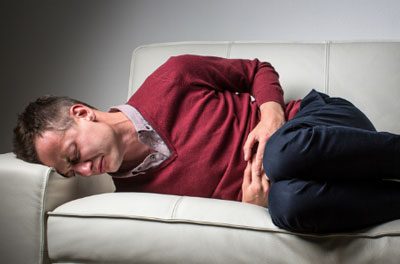 All addicts, regardless of age, sex and duration of dependence, experiencing reproductive disorders – infertility, impotence. Parenteral use of toxic compounds contributes to the viruses of hepatitis, AIDS and HIV infection.

Why do people use methadone

As an analgesic methadone is rarely used. A few decades ago drugs, the drug began to be used to treat heroin addiction, is rapidly gaining pace. Indeed, some people came out from the hospital completely healed, they tried to find the next portion of the drug.

But after a while it became clear that one addiction was replaced by another, more dangerous – methadone. Former drug accumulated in the body and required regular incremental introduction. After a while doctors caught on and gradually lower drug dose, eliminating the euphoric effect.

Methadone overdose causes more oftenother drugs. Some people sincerely believe the toxic substance is a drug and increase the dose in the alleged therapeutic purposes. Rapidly progressing symptoms in the majority of cases leads to death. 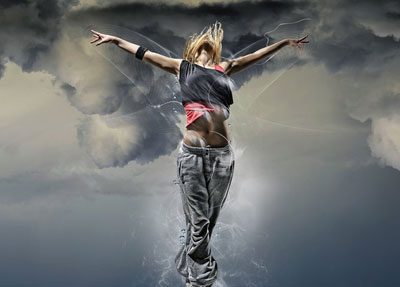 Threat action of methadone is not pronounced euphoric action. Pleasure after taking "street" drugs are not as spicy as heroin, and too stretched in time. The desire to "get" the emotion makes the person to increase the dose, forgetting that the body has already accumulated a sufficient concentration of poison.

No addiction is not treated as long and hard as methadone. This is based on physico-chemical properties of the active substance and characteristics of:

Rehabilitation using methadone a few times was widely discussed drug treatment in Russia, but testing was not carried out. The UN strongly recommends the use of pharmacological drug as a means of substitution therapy in the country. Against this method of treatment is the Committee on control over drug trafficking, noting the frequent cases of overdose.

Opponents of substitution treatment of heroin with methadone in the ensuing discussions lead his main argument – does it make sense to replace one drug for another, besides cheaper and more available? 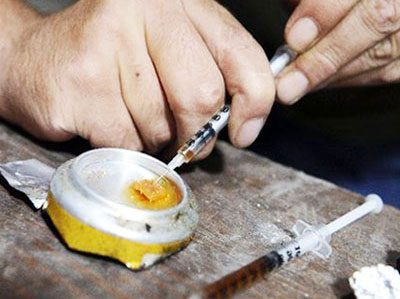 Methadone is an extremely powerful and dangerous painkiller, you can take it only by the doctor and under his careful supervision, as even a slight overdose can cause death. Crucial weight, age and "experience" of addiction of the patient. Consequences of methadone will seem insignificant in comparison with the clinical picture of overdose.

90% of all cases of fatal intoxication with methadone occur with the first intravenous injections. Ignorance of the mechanism of action of the chemical, the degree of "purity" of the drug leads to rapid death. More experienced addicts are not immune from overdose, but always have at hand the antidote.

Increased concentration of methadone in the bloodstream in case of overdose leads to a rapid development of poisoning. The toxic chemical associated with red blood cells and reduces their functional activity. The structural elements of blood lose the ability to transfer molecular oxygen to the brain cells. Oxygen deprivation provokes frustration the regulation of critical life support systems:

How dangerous is methadone? The transience of symptoms of overdose. The addict is not even hours, for the relief of an attack or to call an ambulance. Pulmonary edema or brain is developing rapidly, with loss of consciousness possible at the initial stage of poisoning. Only the help of nearby friends or family members can save a man from death.

The symptoms of methadone withdrawal

Systematic use of opioid causes the development of the syndrome one month after the start of drug administration. Methadone withdrawal is manifested by the following symptoms: 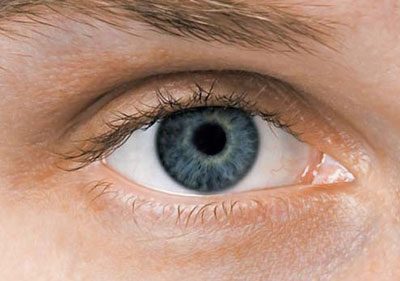 An important feature of the methadone withdrawal is the regular watering that occurs on the second day. Increased salt concentration in the tear fluid forces the addict to comb the eye to sustainableredness.

On the third day of withdrawal appears excruciating pain throughout the body, reaching a peak after two days. Even antispasmodics are not able to eliminate painful spasms, and tranquilizers – psychopathic behavior and aggression. The addict emerges from a break-up with partial amnesia.

The signs of methadone overdose 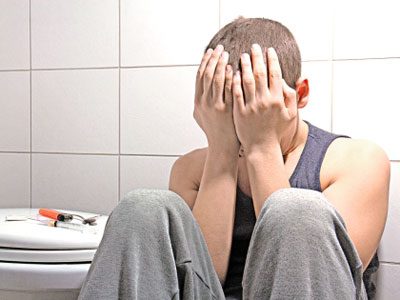 Overdose drug starts with disorders of the digestive system regardless of the method of drug administration. At first there is nausea, alternating retching and secretion of foam from his mouth. Then there is involuntary urination because of acute kidney failure.

Person drowsy, the pupils constrict, dizzy. Doctors warn relatives that the main thing – not to allow the addict to lose consciousness, otherwise the symptoms of overdose will rapidly increase. The consequences of poisoning with methadone heavier:

In case of overdose, there is a rapid loss of brain cells. The addict loses the ability to navigate the space and something to see, to hear, to recognize the speech.

The final stage of getting an overdose respiratory depression until it stops. The brain ceases to function and the heart beat. Death is almost always stated.

The closer to the medical institution will be an addict in overdose, the higher its chances of survival. After calling the ambulance crews need to relieve the human condition: 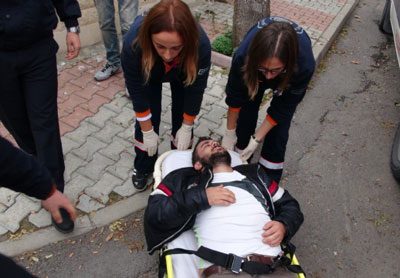 Treatment of methadone, especially in overdose involves the use of naloxone. If the relatives possess the necessary knowledge and medication available in the medicine Cabinet of an addict, the urgent need to do intramuscular injection. If a person has not regained consciousness and his condition continues to deteriorate, need extra shot. At the moment, naloxone is the only quality antidote methadone.

Undoubtedly, the signs of methadone relative or loved one to instill the terror of all the family members. To not lose hope – recovery is possible. We need to combine our efforts to connect friends and seek immediate medical help. The main condition of successful therapy is the desire of the addict, unfortunately, without his consent, the treatment is doomed to failure. A trusting relationship in the family will help to convince the addict to go to a clinic for rehabilitation.