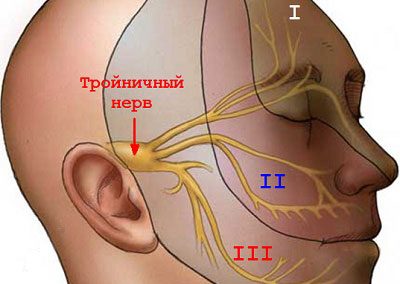 Alcohol and carbamazepine: compatibility and effects of mixing 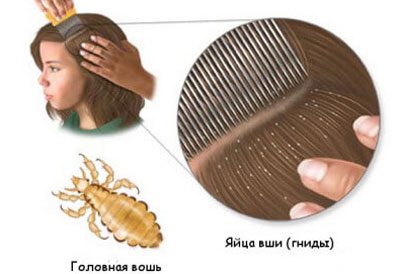 Americna water and alcohol: used in the alcoholism 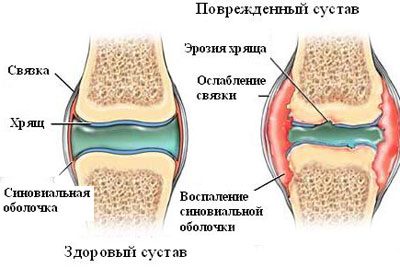 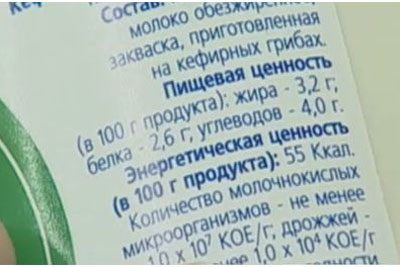 Does the yogurt with a hangover 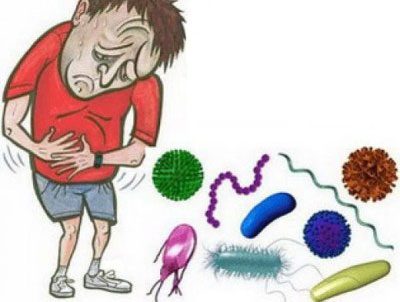 How to take activated charcoal before drinking

Aspirin medicine used for getting rid of the painful symptoms, reduce the heat and inflammation. Acetylsalicylic acid is used not only in therapy but also as a prevention of various cardiac pathologies.

Some people are saved from the manifestations of a hangover this medicine having excellent analgesic qualities. However, not all know whether it is possible to combine aspirin and alcohol, as well as what consequences can occur if improper application of the two substances. 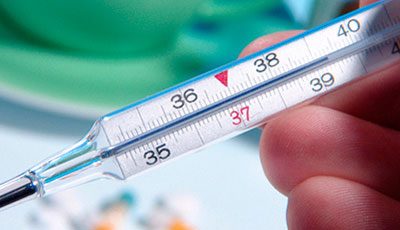 Any alcoholic drink, even alcoholic, cannot be taken in conjunction with drugs, and aspirin is no exception. Dissolving in the digestive system, the drug begins to interact with the ethanol. The impact of the substances causes an increase load on the vascular system, leads to the breakdown of the liverand destruction of the mucous membranes of the stomach. Application of funds against the use of alcohol may threaten not only the health but also human life.

Aspirin with alcohol taken together, can harm the internal organs. First of all, jeopardizing circulatory system, stomach and liver. 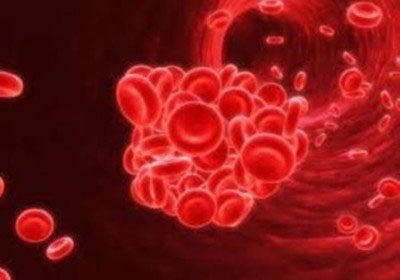 With moderate consumption of alcoholic beverages ethanol reduces clotting of the blood, having a thinning effect, and reduces the risk of blood clots. Some scientists believe that red wine is particularly useful for the hematopoietic system, and recommend periodically to drink a glass of wine during the meal.

Aspirin – a means of having a similar effect, reducing blood clotting, and prevents blood clots. However, in combination with alcohol, its impact is magnified, which can cause internal bleeding, including brain. Especially dangerous is the combination for people with bleeding ulcers, as well as in the use of large doses of alcohol.

Effects on the gastrointestinal tract 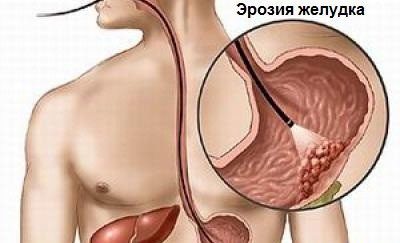 The drug belongs to anti-inflammatory drugs, successfully eliminating pain. However, the drug has a fairly aggressive effect on the mucous membranes of the digestive system. Joint use of drugs and booze leads to increased negative effects.

As a result of combination substances may occur the ruptures of large arteries, open hemorrhage, which tend to be hidden within. At this point, the patient may feel weakness, fluctuations in blood pressure, disturbance of consciousness. Systematic use of two substances injured the mucous surface of the gastrointestinal tract, developing ulcerative-erosive lesions, produces anemia.

To avoid negative effects on the digestive tract, you should drink a pill for 24 hours before use, drink. In addition, this measure helps to prevent a hangover the next morning.

Patients with chronic diseases of the stomach and intestines, is absolutely not recommended to combine the drug with alcohol: so it is possible to significantly aggravate the situation and expose his life to danger.

The effect on the liver 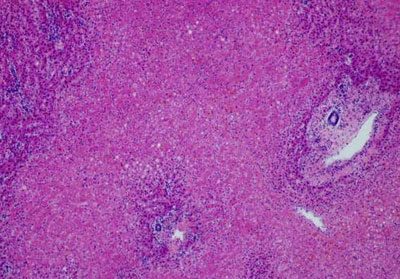 Alcohol abuse provokes irreversible damage to the tissues of the liver, disturbance of its functioning, and the development of various chronic diseases. The combination of ethanol and drugs is having a negative impact on the body, especially if the patient has any liver pathology. The interaction of substances leads to increase their hepatotoxic properties. The intensity of the destructive effect depends on the state of human health, and the amount of alcohol consumed.

Therefore, to apply even a minimal amount of alcohol during treatment with acetylsalicylic acid unacceptable: their combination may provoke an overload of the liver and necrosis.

Aspirin before the meal

To predict the negative consequences that may arise from the use of medication to alcohol, it is impossible. Everything will depend on the overall health of the individual and his peculiarities.

To avoid possible serious complications , experts recommend to drink intoxicating drinks no earlier than 12-20 hours after ingestion of the drug. Adopted on the eve of the feast the tablet of acetylsalicylic acid may reduce the negative symptoms of a hangover.

Can I take together 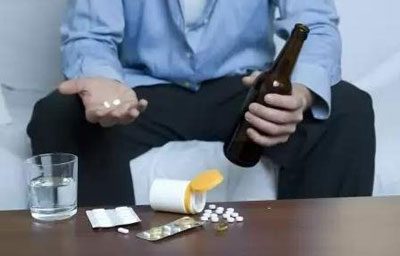 Alcohol-containing beverages and medicines, as a rule, mixing is not recommended. Substances can increase the toxic effects of each other and cause a worsening of existing chronic diseases. This applies particularly to acetylsalicylic acid: alcohol triggers the production of hydrochloric acid, which is a common factor in the occurrence of gastritis and gastroduodenitis.

It is extremely dangerous to drink the capsules with etanolsoderzhaschih drinks. In these cases, the healthperson can deteriorate in a matter of minutes that could threaten his life.

If you need the medication to take a pill is recommended for 12 hours prior to drinking alcohol beverages.

It is not necessary to drink alcohol in conjunction with aspirin, and the more medication a drink that contains even a minimal amount of alcohol. 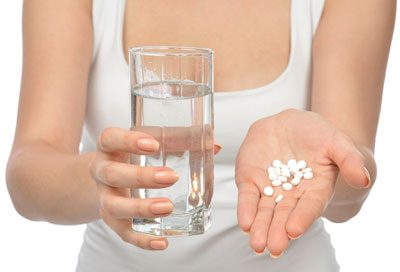 To avoid acute hangover, many people take the medicine immediately after the party before going to sleep, but to do it categorically: aspirin after the alcohol is allowed to receive after 6-10 hours. The drug should not be taken on an empty stomach, drink it with any drink other than water.

The tool has various forms of release. The most gentle are instant medications, characterized by lack of adverse effects on the gastrointestinal system and quick effect. The maximum dosage of medication in acute hangover is not more than 3 tablets or 300 mg.

In addition, acetylsalicylic acid is contraindicated for eliminating hangover symptoms the patients with pathology of the digestive system.

Aspirin for the hangover

The consequences of abuse of liquor is manifested in the form of headaches, severe thirst, nausea, gag reflex, prostration, and other unpleasant symptoms.

The medication begins its therapeutic effect in a short time after use, it can significantly ease the condition with hangover.

Aspirin with alcohol poisoning has blood thinning property, resulting in increased blood flow, oxygen supply to the cells and saturate the body with glucose. The drug has the following properties:

Aspirin when hungover is an effective way to improve the General health of the person, but as a self-medication acetylsalicylic acid not applicable. The tool does not eliminate the body of toxic substances generated as a result of disintegration of alcohol, therefore in the treatment of a hangover combined approach is used, including the use of drugs that promote the excretion of alcoholic poisons.

Acetylsalicylic acid is often included in the content of medicines antipohmelin.

Effervescent form of the drug hangover 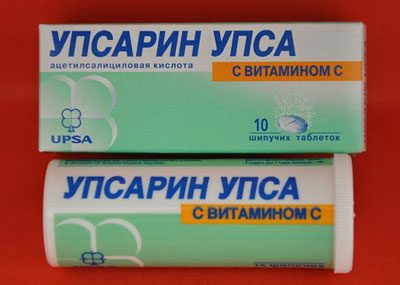 Most often when hangover drink "Aspirin UPSA" and "Upsarin" in the form of effervescent tablets, with a rapid therapeutic effect.

In addition to the main component in the composition contains: sodium citrate, citric acid, soda, povidone, aspartame. In addition to analgesic action, the funds are diuretic, tonic and antioxidant properties.

Soda and citric acid increase the rate of dissolution of the active substance povidone acts as adsorbent, contributing to the elimination of the metabolites of ethanol, quickly bringing the patient to the feeling.

Effervescent tablets dissolved in a glass of water: this will prevent dehydration-induced hangover. The drug in effervescent form are allowed to eat 2 hours before the party and after 6 hours after drinking.

However, regularly use this method of treatment of a hangover should not be due to the large number of side effects.

Who can't drink aspirin for the hangover

The drug should not be taken by patients who have the following diseases: 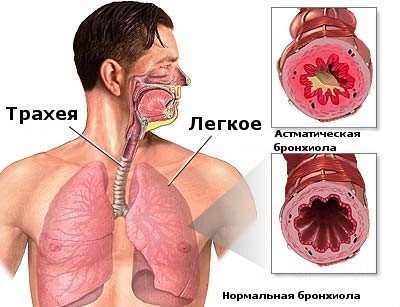 To avoid complications, do not put your health at risk and to use with alcohol medicines: this may lead to increased side effects and General intoxication.